Ashley Judd and Seth Meyers Say They Want to Help Sex Workers. They Could Start by Shutting Up.

And, like some government-funded “awareness” groups, Judd and the Meyers are stealing the language of the sex worker rights movement in their battle to keep sex work criminalized.

“For too long, victims of the sex trade have been subject to arrest by law enforcement, instead of those who should be held accountable,” said Ashe Meyers.

To Ashe Meyers and her ilk, women are too feebleminded to be held equally accountable for the sexual activities they participate in; instead, we must treat them as legally equivalent to children, while holding the men they consent to sex with criminally responsible.


Incredibly, they call this a feminist solution to sex work policy. It’s modeled after similar—and failing—policies in Nordic countries, often referred to as the “Nordic Model,” the “Swedish Model,” or (in the U.S.) the “End Demand” model.

With a lot of bad baggage attached to these schemes, and data showing their detrimental effects on sex workers, proponents of asymmetrical criminalization are now trying to rebrand it the “Equality Model.”

Most infuriatingly, they have been pushing this plan to the media as prostitution decriminalization and portraying themselves as being on the side of sex workers. The New York Daily News described Judd’s and the Meyers’ efforts as “join[ing] with sex workers’ rights advocates on Monday to call on state lawmakers to curb the exploitative practices associated with the sex-trade.”

Sex worker rights advocates the world over have denounced the “Equality Model” for recreating the same harms as criminalization, including pushing people into unsafe working conditions, and often resulting in the same sort of bigotry-filled policing that currently plagues vice policing efforts. Don’t be fooled: This is the same old moralistic claptrap, savior mentality, and pro-incarceration “progressivism” that we’ve seen for more than a century.

“Disappointed to see this. To try to present this as driven by ‘sex workers advocates’ is dishonest and paternalistic,” tweeted New York state Senator Julia Salazar. “If you want to know what sex worker advocates want, answer the calls of the many sex workers and trafficking survivors leading @DecrimNY.”

Here’s what some sex workers and activists are saying: 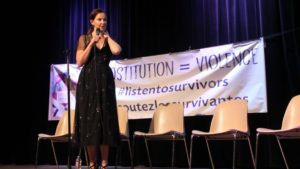