PHILADELPHIA (CBS) — The Philadelphia Police Department, over the years, said their investigation into the 2016 murder of a woman named Rickie Jolene Morgan was always a step away from being solved. CBS3 Investigations has learned the department has filed murder charges in Morgan’s case just weeks ago against a man identified as Byron Allen.

Allen is familiar with the police.

Detectives wrote in this affidavit of probable cause obtained by CBS3 that he terrorized women for months on end back in 2016.

At least four reported to police they had been sexually assaulted. Allen allegedly stabbed and slashed at least one and choked another victim in and out of consciousness.

Police said Allen preyed upon women working in the sex trade on the streets of Kensington following his release from prison on a murder charge in the early 2000s.

The break in the case for Morgan’s family is justice but not closure.

The young mother of two was stabbed repeatedly in the neck and left to die.

Her mother, Carol Smail, spoke with us in June when CBS3 Mysteries first profiled the six-year-old cold case.

“Please, I beg of you to come forward,” Small said in June. “Her daughter just graduated without her mother there. That’s hard. Her children, her sister and I need justice.”

According to records, Allen has been locked up since October 2016. In the years since he was tried and convicted on an attempted murder charge related to a case in Kensington. 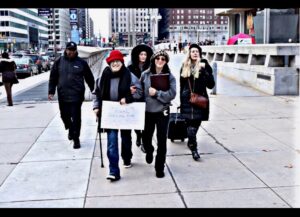 « Blood in the Sand

Boy in the Box finally identified after 65 years Philly Story…. »