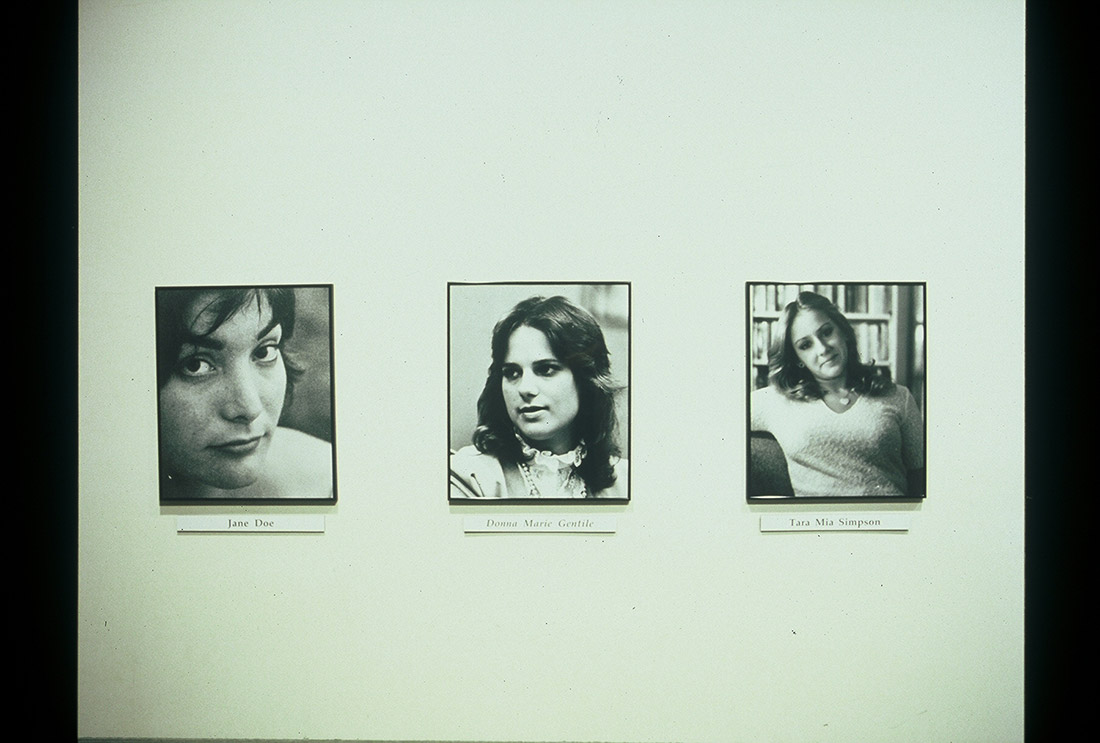 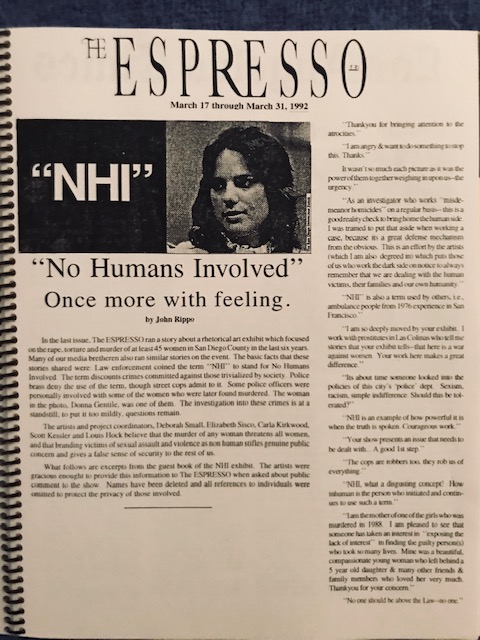 NHI—No Humans Involved, one of ongoing series of public art projects about community issues addressed the sexual assault and murder of forty-five women in San Diego from 1985 to 1992. The project began on February 19, 1992, with the unveiling of two billboards bearing the picture of Donna Gentile and the letters NHI. Gentile was the second victim in the string of murders. A sex worker and police informant, Gentile was found strangled to death, her mouth stuffed with gravel, a month after she testified against two police officers.
Two days after the billboards went up, we opened a rented storefront gallery in downtown San Diego to display portraits representing the forty-five murdered women and distribute a book that described in detail police involvement with Gentile and a number of the other dead women, and police mishandling of the murder investigations.

Carla Kirkwood’s performance, MWI-Many Women Involved, ran for three nights in the gallery space. A community forum addressing the series of murders and violence against women was held in the gallery space on International Women’s Day. The goal of the project was to pay tribute to the murdered women, raise public awareness about the series of murders and the botched police investigation, and relate the local reaction to the crimes to larger social attitudes towards gender violence.
The series of killings became referred to routinely as the “prostitute murders.” By labeling the series this way, San Diego low enforcement skillfully manipulated public perception in order to hinder awareness and outrage, and to cover up the extent of police involvement with a number of the murdered women. Since we are conditioned to believe that violence and death are known occupational hazards for sex workers, we respond to their demise with apathy or a resigned willingness to blame the victim, to accept the murder of a prostitute as one of life’s harsh realities. At the same time, we are relieved that such brutality could never be visited upon those of us who comply with societal mores.

Our attempt to break through the stereotyping that characterized this depiction of the murdered women was partially undermined by law enforcement’s response to the project. On the day the billboards went up, in one of his rare public responses to the project, Richard Lewis, head of the task force assigned to investigate the murders, told reporters: “NHI is an old term that goes way back in murder history, back to the old days on the East Coast” Lewis fictionalized the term, stating he first heard it “when I was a young kid reading detective magazines.” He also said police officers did not use the term in reference to the murders under investigation by the task force. Lewis’ spin on the meaning of NHI was quickly adopted by electronic and print media alike. Ninety percent of the stories about the project referred to NHI as “an old time police term,” i.e., a bit of folksy nostalgia without contemporary currency.

Lewis’ claim that officers don’t use NHI is refuted by published accounts of police officers who admit to using the term. In 1990, the Sacramento Bee quoted a San Diego police officer: “These were misdemeanor murders, biker women and hookers. we’d call them NHI’s-no humans involved.” While the exhibit was open, a police officer and a paramedic both wrote comments in the gallery book acknowledging ongoing use of NHI. Calling himself an investigator of misdemeanor murders, the police officer said he had been trained to disregard the humanity of victims from the “darker side” of life.

The media coverage of the project perpetuated the myth that all the slain women were prostitutes, drug addicts, and transients.

Again, the overwhelming majority of TV news and print stories routinely referred to NHI‹No Humans Involved as a project about the “prostitute murders” although we repeatedly emphasized the diversity of the victims-beauticians, waitresses, homemakers, a word processor, nurse, stock supervisor, grocery clerk, hospital kitchen aid, and a writer. Less than half the slain women were known sex workers. However, public perception of the murders was framed by this generalized labeling of all of the victims as “bad girls.”

While the media was sympathetic to the concept of presenting a human face to the murdered women coverage of the project tacitly reinforced what Linda McCabe, a legal advocate, has called a “nationwide pattern of denial.” McCabe states, “If we can find some fault with the victim’s behavior or demeanor, then we can rest assured that we are invulnerable to such attacks.”
Because of the specter of police involvement with a number of the murdered women, San Diego officials-from the mayor to the district attorney to the police chief-did little to refute the idea that these forty-five women deserved to die because of how they lived.
This message can be contrasted to that surrounding another series of murders that took place in San Diego in 1990. In this case, all of the victims were brutally sexually assaulted and murdered by an intruder who entered bedrooms in a quiet, middle-class neighborhood, and killed five women. The largest manhunt in San Diego Police Force history stopped him. Police held daily press briefings from a special command post set up in the neighborhood and a city councilman went door-to-door warning residents to take extra precautions. The press and police emphasized that one of the women was a college student who worked at a sporting goods store. They de-emphasized the fact that she also worked part-time as a nude dancer. Nude dancing was not an occupation that fit this particular victim profile.

When asked by a reporter to compare the speedy resolution of the murder of Cara Knott, a college coed found strangled in San Diego in 1986, to the foot-dragging occurring in the growing ‘prostitute murder series,” a sheriff responded, “It’s hard to evoke as much empathy for a prostitute as there is for a pretty little college coed.”

Selective law enforcement reinforces social double standards and promotes a belief that bad girls get what they ask for. But the lines separating “good girls” from “bad girls” is mutable and any one of us could appear to be a “bad girl” at any time. Nancy Allison White, the twentieth victim in the San Diego “prostitute murder series,” was a stock clerk from Santa Ana, California, whose car broke down at night along the 1-8 corridor where a number of the murdered women’s bodies were dumped. According to Detective Tom Streed, the initial lead investigator in the cases, “White’s clothing was not inconsistent with what would arouse a person involved in the other cases.” White’s casual summer attire of shorts and a tank top on the evening of her murder placed her in jeopardy. Detective Streed’s dangerous appraisal of Nancy Allison White’s demeanor is representative of the insensitivity exhibited by law enforcement in their investigation of these forty-five murders.
It is also indicative of a larger social reflex to blame the victim. This attitude increases the danger every woman faces when out alone for any reason.

The purpose of NHI-No Humans Involved was to humanize the victims and demonstrate that violence against any woman is unacceptable. The gallery exhibition literally lent a face to the forty-five murdered women. From 1985, when the killing began, until 1992, images of only seven of the women appeared in the local press. The police refused to release photographs of the others on the grounds that their publication might hinder the investigation. When we were unable to obtain photographs of all of the actual murdered women, we asked women from the community to act as stand-ins for thirty-seven of the women for whom we could not get images. The stand-ins were educators, homemakers, administrators, therapists, social workers, writers, artists, lawyers, scientists, ranchers and entrepreneurs. The use of stand-ins provided a message of solidarity with the murdered women and all women in the community. It was a public acknowledgment that violence against one woman is a threat to all women, and that to brand victims of violent sexual assault as prostitutes, drug addicts and transients stifles genuine public concern and gives a false sense of assurance to other women.

The NHI project created a moment of public awareness and a broader sense of community in San Diego. It gave a voice to Pat Riccio, mother of one of the slain women. Pat spoke with great courage and eloquence about the neglect, disrespect, and callousness of the authorities investigating the death of her daughter. The project provided a place for the family of Linda Christine Marler to join together to remember their lost sister. Speaking about the series of murders within a public art context allowed San Diegans to examine seriously the issue of violence against women. People were genuinely astonished to learn of the magnitude of the series of murders and the depth of police involvement with the crimes. Through the project we were able to assert that no woman deserves to die the brutal death these women suffered: “The punishment for prostitution is not execution” (Linda Barker-Lawrence, National Victim’s Center, Dallas, quoted in the San Diego Union, February, 12, 1989).

However, somebody is still getting away with murder. The task force created to investigate the murders has disbanded. There is an attempt to pin multiple murders on men who had been in jail for a number of years at the time the murders were continuing. Law enforcement successfully used the stigma against prostitutes to cover up their own corruption. Sadly, the police are a reflection of the society they serve. Hopefully, NHI-No Humans Involved shed light on the danger faced by all women in a society that denies the true culprits in the “wages of sin,” favoring the comfort of the false dichotomy created by the good girl/bad girl label.

READY FOR LOVE in Podcast »