French President: It’s time to stop telling women what to do with their bodies’ 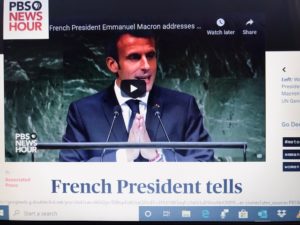 French President Emmanuel Macron says it’s time for authorities to stop telling women “what to do with their bodies” and wants international cooperation to stop violence against women.

Speaking at the U.N. General Assembly, Macron said “it’s time to put an end to all of this,” to stop allowing women to be victims of sexual and other abuse and instead to give women “their due place” in world leadership.

Macron urged other leaders gathered in New York to join him in an initiative to “guarantee across the board” an end to violence against women.

Macron has been outspoken against sexual misconduct since the Me-too movement emerged last year, though his government has been criticized for not going far enough to protect women’s rights.

Macron is joining Canada and some other countries in launching a new initiative this week to get more girls in school around the world. Millions of girls around the world never go to school and millions more drop out at a young age.