Why El Cajon Blvd. Is a Prostitution Hotspot by Kyle Keegan Oct 8, 2009 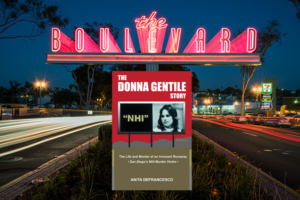 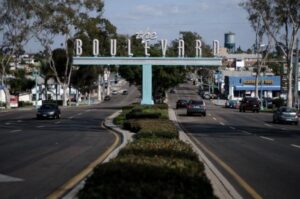 Daybreak along El Cajon Boulevard can be a rude awakening and a reminder of the road’s most illicit reputation.

A few women dressed in short skirts, leather jackets and high heels waited this morning near the boulevard’s intersection with Kansas Street. A motorist pulled up next to the group, one woman slid into the front passenger seat and the car took off. 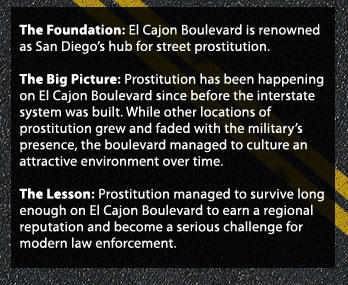 Across the street, customers at a 24-hour diner worked on their breakfasts and read the newspaper as if part of a normal routine. They turned to watch the remaining women when a patrolling black and white pulled up.

The police officers separated the remaining two women for questioning, but eventually let them walk away. They had no evidence to prove the women committed a crime, and at least for the time being, the women had lost their interest in standing at that corner. They’ll be somewhere else tomorrow.

The corner of Kansas Street and El Cajon Boulevard is one block south of a YMCA youth activity center, less than one mile away from several schools and not too far from popular neighborhoods. It is also within a five-block radius where San Diego Police arrest the most people for crimes of prostitution. The boulevard is renowned as the city’s hub of prostitution and its reputation has helped sustain the level of criminal activity while other hotspots have faded with time.

“Why El Cajon has survived as this area where prostitution does take place, is a question that probably goes beyond my expertise and before I was ever a prosecutor or before any of us were here,” said Kristin Beattie, who prosecutes neighborhood crimes in the Mid City area.

Prostitution is often called the world’s oldest profession and it dates back in San Diego as far as anyone can remember. In the last half century, the Navy and Marine Corps presence following World War II helped support prostitution markets in the Gaslamp and Loma Portal along Midway Drive. El Cajon Boulevard was also an ideal place for prostitution, because it had high traffic flow and a community of businesses that catered to adult entertainment.

Prostitution thrived in those different regions but it had a more complex upbringing along El Cajon Boulevard. Midway and the downtown markets relied heavily on the military while the boulevard cultured its own reputation. My efforts to find a definitive account on prostitution’s origin along the boulevard were unsuccessful, but many police, residents and business owners painted a similar story that had been passed along at some point or another.

Before construction of the country’s interstate highway system during the Eisenhower Administration, El Cajon Boulevard was U.S. Route 80 and San Diego’s main east-west road. It resembled more of desert town than part of a metropolis, and most of the road’s services catered to travelers like tourists or businessmen. That included hotels, card rooms, strip clubs and in that atmosphere, some level of prostitution.

As San Diego’s population grew, the city became more developed and the military presence eventually diminished. Development of coastal real estate killed businesses that catered to illicit activities and the community put more pressure on law enforcement to prosecute prostitution. The city successfully pushed prostitution out of Midway with the help of geographical restraining orders. The downtown improved through decades of redevelopment.

But El Cajon Boulevard received less attention from the city. The new interstate system shifted traffic away from the road, which at that point was specifically catered to travelers. Business suffered and an area with some prostitution became the perfect atmosphere for a booming illicit trade. Travelers could get a cheap motel, find a hooker easily on the street and escape quickly on a nearby interstate. The boulevard started to earn a reputation as the place in San Diego to find sex for a price.

“From a business model, it’s location, location, location. You know you’re going to get a lot of traffic there,” said Asst. Police Chief Cesar Solis, who oversees investigations for San Diego Police. “We are exerting efforts to stop it completely, but it’s a major problem.”

Today, overcoming the boulevard’s reputation is the biggest challenge for law enforcement. It’s no longer as simple as identifying local troublemakers and slapping them with a misdemeanor charge.

Prostitution has become more organized than previous decades and many of the women work on a rotation of major West Coast cities. El Cajon Boulevard is part of a circuit that includes areas of Los Angeles, Oakland, Las Vegas and Phoenix. The women just move to a new city when they need to skip on an arrest warrant or mounting citations.

Local and federal law enforcement officials are concerned that prostitution is becoming a larger problem with more gang involvement, greater use of the internet to arrange meetings and more juvenile sex trafficking. Gangs have realized that a significant amount of money can be made in prostitution with less risk than trading drugs or guns. Prostitution is a misdemeanor and some sentences are reduced after counseling.

“They’re not out of drugs, but they can make more money with prostitutes,” said Lt. Rudy Tai, who manages the enforcement side of SDPD’s vice unit.

The new climate of prostitution has forced law enforcement to take different approaches on El Cajon Boulevard than it did long ago with Midway and the downtown. The prostitutes on Midway were mostly local woman and they chronically used the same few locations. Business owners knew them well enough that police could identify and effectively restrict them from the area.

“[Midway] was an area that was easier to control and a population of prostitutes that were known to the community members,” said Beattie, a deputy city attorney. “In just those two areas, it stands in direct contrast to El Cajon Boulevard.”

Tai said police are conducting regular sweeps of the boulevard, using informants to pinpoint leaders and placing undercover operatives when necessary. The transient nature of modern prostitution can make significant victories harder to come by.

“The easiest way to deal with prostitution is visibility. If they see us out there, it reduces the call volume,” Tai said. “We’re up there close to five days a week doing some type of arrest.”

In the past year, police have recorded the vast majority of 588 arrests around the area of 30th Street and El Cajon Boulevard, according to a mapping analysis by voiceofsandiego.org. The map clearly shows the hub and other locations appear to be scattered incidents. The area near 30th Street has a strip club, nightclubs, numerous pawn shops and 24-hour fast food. Most of the boulevard’s cheap hotels are farther east. 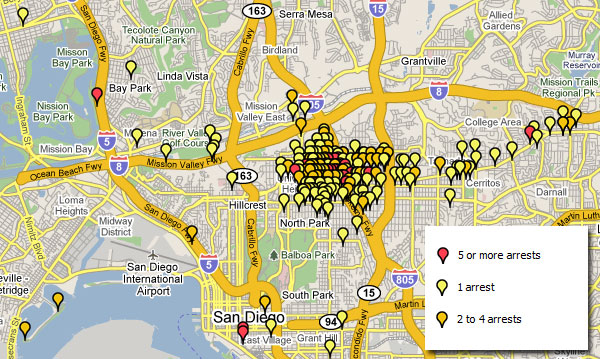 The mapping analysis is a conservative estimate of the number of people arrested for prostitution since other crimes may take precedent in the Police Department’s statistical reporting method. A person arrested for prostitution and possession of cocaine would be recorded in the statistical log as a narcotics arrest, because the felony drug crime takes precedent over the misdemeanor. That can lead to an underrepresentation of misdemeanor crimes.

Stan Greenberg works about a block north of El Cajon Boulevard on 30th Street as president of Central Construction. He said the neighborhood’s prostitution presence was overwhelming six months ago but the situation has improved in the wake of additional police sweeps over the summer.

That’s also good news for Todd Gloria, whose City Council district covers much of the boulevard. He has advocated for more police presence even as the department faces staffing and budget shortfalls.

“It has a diminishing effect when the reputation remains and the activity continues,” Gloria said. “The reason why I want to be aggressive about it is because prostitution, graffiti, things of that nature, communicates what’s acceptable, and it isn’t acceptable in Mid City and City Heights.”

It’s hard to say whether the recent enforcement tactics will have an impact on regional reputation of El Cajon Boulevard. Historically, the prostitution activity has simply changed location along the strip to an area with fewer patrols.

“It’s unrealistic to say here’s a crime, we’re going to stop this category entirely,” Beattie said. “I don’t think anyone can sit there and say that. All we can do is our best and try to match the challenge that we’re being faced with.”

Apart from prosecuting many of the city’s prostitution cases, Beattie manages the Prostitution Impact Panel. It’s a bi-monthly group counseling session for male customers of prostitution. Members of law enforcement, social services, business and the community sit down with the johns and explain how their crime impacts the community. The goal is reducing recidivism.

Theresa Quiroz was a founding member of the panel when it started in 2002. She describes herself as a pedestrian and City Heights resident who frequently shops along the boulevard or waits at bus stops. On one occasion, she was walking along the boulevard with her 6-year-old daughter and a motorist asked Quiroz if she was “working.”

“When it’s infringing on a mother walking down the road with her child, it had gone too far,” Quiroz said.

She joined the panel to help combat the problem, but she has been attending fewer panels recently. Quiroz expressed some skepticism that El Cajon Boulevard could place prostitution permanently in its history.

“There will always be people who want prostitutes and they will always need to know where to go,” Quiroz said. “The only thing we can do is to move it to somewhere else.”

Please contact Keegan Kyle directly at keegan.kyle@voiceofsandiego.org and follow him on Twitter: twitter.com/keegankyle. And set the tone of the debate with a letter to the editor.

Where Was the “Stand Your Ground Law” By Al_Hajj_Frederick_Minshall »