Michael Douglas Carlin Interviewed me July 2019 in Los Angeles, ( I was a columnist for this paper for many years. “Love Buzz”) 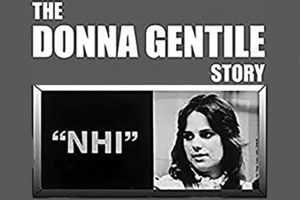 The Donna Gentile Story made national headlines. She had agreed to work with Internal Affairs to take down corrupt police officer. She knew it was a high stakes game she was playing. When her body was found at the top of Laguna Mountain with gravel stuffed in her mouth, it was quite a statement. The City of San Diego sealed her autopsy – aberrant behavior for a city preaching transparency. It was seen as a love triangle but it was so much more. There was a patrolman she feared and a Lieutenant she felt drawn to but they were both being investigated by Internal Affairs. Donna’s testimony pushed these men out of the jobs that they loved.

Her life of prostitution put her at risk, her affiliation with police raised the stakes, but becoming an informant for Internal Affairs pushed the risk beyond the breaking point. Sitting in jail she foretold her own demise. “I reported the patrolman for sexually harassing me. My life is in danger when I get out, the cops are waiting for me.”

Donna Gentile’s story is written by her cousin that knew her well. She had access to diaries, letters, and personal effects as Anita DeFrancesco wrote the definitive book about this murder. She poured her soul into the work and the result is a page turner that will not disappoint. For many of you that are long time readers, DeFrancesco wrote a column in the Century City News for over a dozen years. This book is her crowning literary achievement.

Here is the summary:
Donna Gentile, an innocent runaway, survived as a prostitute, hired and victimized by distorted law protectors of the SDPD, caught in a triangle scandal between the power of two San Diego policemen, the Lieutenant who she cared for and the Patrolman who she feared. As a result of her court testimony they were fired. Her life became furthered complicated when the Internal Affairs division exploited and coerced her as a police corruption informant and left her murdered with a mouth full of rocks to silence her voice! In March 1985 from the Las Colinas jail Donna predicted her own murder. In June 1985 her brutally murdered body turned up in Mt. Laguna in San Diego county. She was choked alive on a cocktail of gravel. Was this Donna’s dream? No. She dreamt of love, family, home, the white picket fence, the dream of so many young women of her day. This is the True Crime story of the authors first cousin…her story…the story of Donna Marie Gentile, an innocent runaway, high profile prostitute, police informant. Her autopsy was sealed in hope to silence her voice. The FIRST AUTOPSY TO BE SEALED in the city of San Diego. Why?Author, Anita DeFrancesco, clearly remembers the words Donna verbalized on the telephone and in a letter that she underlines from the Las Colinas San Diego county jail: ” I reported the patrolman for sexually harassing me” “My Life is in Danger when I get out, the cops are waiting for me”. The stolen life of the 22 year old Philadelphia native, recorded a tape for CBS television and begged not to be released from jail in fear that the cops were waiting for her. Her spoken words:”I feel someone in a uniform with a badge can still be a serious criminal”.DONNA ASKED FOR HELP FROM THE SDPD BUT SHE WAS DENIED BY THOSE WE PUT IN POWER TO SERVE AND PROTECT… Hear her truth now and secrets unsealed. “The Donna Gentile Story” giving voice to help future innocent runaways forced to survive the streets as sex workers and victimized.A trailblazer who carved a path for women in this current climate, the era of “Me Too”. The high profile story exploded in the media and was nationally televised. Artists unveiled a billboard with the logo NHI; No Humans Involved; bearing the picture of Donna which was faced toward the SDPD headquarters. We believe her murder was a “cover up”. No one should be both a criminal and a victim!READ THE TRUE STORY BEHIND DONNA MARIE GENTILE’S MURDER AS TOLD BY THE FIRST COUSIN, WHO WITNESSED EVERY CALL, EVERY MOMENT….

A HIGHLY ENJOYABLE READ ABOUT A VERY SCARY SUBJECT – A FIRST-RATE MYSTERY
Verified Purchase
What I love about this book is the author’s way of making all of the characters pop right out of the page. She makes you understand what makes them tick. The story is about the author’s young cousin who ran away from a long term detention center, went to San Diego, and became a prostitute. There she developed a complicated relationship with the police, and was manipulated into becoming a police informant. She was even called to testify at a Civil Service hearing involving a police offer, and was scheduled to appear at another hearing when she was found naked and dead in a remote part of San Diego County, with gravel stuffed down her throat – the traditional punishment for a “snitch.” Before she died she had left a tape recording with her attorney which began, “In case I disappear somewhere or am missing…” and suggesting that “someone in uniform with a badge” might be a criminal.

Her death is still unsolved, and the author has spent many years tracking down the many tangled leads. As I read “The Donna Gentile Story” I felt as if I were reading a first-rate mystery novel, with all the possible suspects and others involved presented as if they were standing right in front of me. But as the author writes on several occasions, “You decide!” She gives you all of the evidence, all of the twists and turns and blind alleys, and then challenges you to solve the mystery. I came to a conclusion, but the more I think about it, I may be wrong…This book is a classic page-turner. No one will be able to put it down. It is also a highly insightful and perceptive look at prostitution and police corruption, and how they can be intertwined in tragic ways. A five star plus book, in my opinion.