Did political secrets die with him? 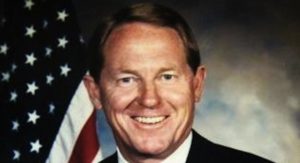 A fabled San Diego vice and intelligence cop — accused by an ex-SDPD officer of running a political opposition research operation that collected intelligence on local politicos for then-chief of police Bill Kolender — has died.

Retired police captain Kenneth E. Moller died on November 5 at his home in Rancho Santa Fe, according to an obituary posted online at Legacy.com.

The Escondido native, who died of melanoma, was 75.

In his heyday, Moller was the nattily-dressed cop king of San Diego’s lower Broadway, where mobsters and vices of all sorts, including bars, prostitution, and gambling, flourished in the service of sailors on shore leave.

As he rapidly ascended the ranks, the ex-Marine allegedly assumed more than a few extra duties for then-chief of police Bill Kolender, who harbored secret ambitions to be mayor of the city, according to a sworn deposition provided by an ex–San Diego police officer.

In 1986, Moller was accused by the former cop of running a political intelligence unit for Kolender, a close friend and ally of Republican mayor, senator, and California governor Pete Wilson. The San Diego Union broke the story that November:

Kolender and Moller, who reportedly has denied Hannibal’s allegations in a separate deposition, could not be reached for comment.

Hedgecock, who won the election, said yesterday that he had “never heard of this before.” By election time, Hedgecock said, “Kolender had dropped out. He wasn’t a factor.”

Hannibal’s testimony, the Union reported, was given in conjunction with a worker’s compensation claim made against the city by the ex-cop, who had pleaded guilty to obstruction of justice in connection with the operation of prostitution ring called “Fantasy Outcall.”

The deposition describes his entry into undercover work in 1970, three marriages, a shooting, and his “going down in a cesspool” of peep shows, massage parlors, prostitutes and years of almost constant use of alcohol and marijuana before his arrest.

It also describes a period before then-mayor Pete Wilson’s election to the Senate in November 1982, when potential candidates were lining up in anticipation of a vacancy in the mayor’s office.

Hannibal claims that Moller, then a lieutenant, pressured him to investigate because Kolender believed his chances were good, “if he didn’t have to run against Hedgecock.”

According to the testimony, Kolender wanted to get enough dirt on Hedgecock, in particular rumored visits to sex workers, to force him out of the race.

Under questioning by Thomas Calverley, an attorney in the city’s Workmen’s Compensation Division, Hannibal said: “They came to me, and they said — it was Moller — and he says, ‘You have got so much knowledge of who participates in massage parlors. You know our chief is thinking of running for mayor?’

“And I says, ‘Yeah.’ He says, ‘Well, we’re trying to find some dirt on Hedgecock. Didn’t he frequent the massage parlors?’

“He says, ‘I think you better go back and start looking through your notes.’ And I says, ‘Well, I would remember the name… ‘

“To me, he was pushing me, trying to jeopardize the situation to fabricate something to try to blackball a person from politics.”

Later, under questioning from his attorney, Hannibal claimed he “went to every lieutenant in every division to try to find something” about Hedgecock before returning to Moller with nothing.

Hannibal said he also was compiling information on other politicians that “was all submitted to the intelligence units on three-by-five cards for the chief’s meetings.”

Kolender was later elected sheriff. He is said to be currently suffering from Alzheimer’s. Hedgecock, forced from the mayor’s office as a result of the J. David Dominelli money-laundering scandal, became a radio talk-show host and is now working for Douglas Manchester’s U-T San Diego internet-TV arm.

He is a major financial backer of Manchester-favored Kevin Faulconer, a GOP city councilman, in this week’s election to replace fallen Democratic mayor Bob Filner.

Moller, who retired from the police force in 1994, went on to become president of Heritage Security Company.