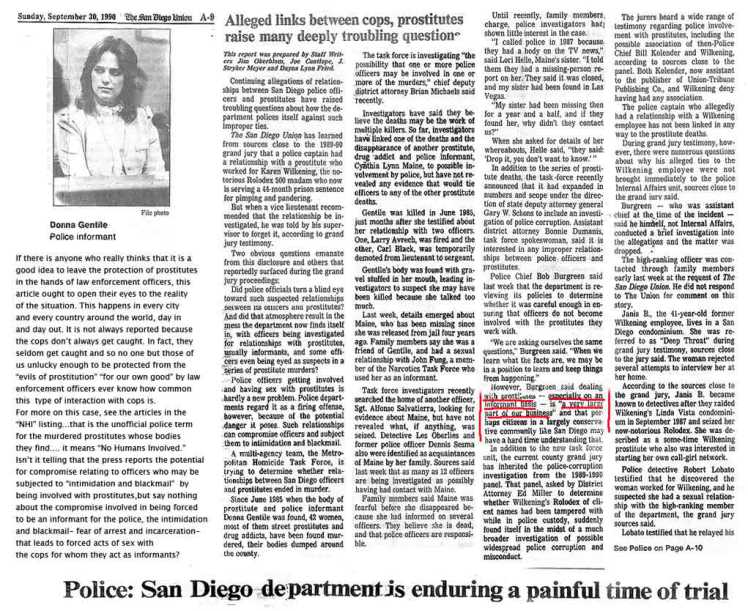 SAN DIEGO (CBS 8) – Prostitute Donna Gentile’s autopsy will remain sealed, even though it’s been more than 30 years since the police informant’s high-profile murder.

Gentile, 22, was found naked, beaten and strangled off Sunrise Highway in 1985, five weeks after she implicated two San Diego Police officers in a prostitution scandal.

Reports that the killer had stuffed gravel in Gentile’s mouth led some to wonder if she was murdered because she talked.

In her May 1985 testimony before the Civil Service Commission, Gentile said that SDPD officer Larry Avrech had been to her apartment on several occasions, and that the two had sexual contact.

Avrech, at the time age 32, denied having sex with Gentile but he was fired from the police department nonetheless for giving Gentile inside information on vice raids.

Gentile also testified about traveling to the Colorado River with SDPD Lieutenant Carl Black and another SDPD officer. Black was demoted to sergeant for contacting Gentile’s probation officer on her behalf.

The agency issued a denial letter, which said the San Diego County Sheriff’s Department wants to keep the autopsy sealed:

Until this directive is rescinded by the investigating agency, we are unable to release any information or provide any copies of our reports regarding this case… The public interest in the release of these reports and the information contained within does not outweigh the public’s interest to withhold this information as it may interfere with law enforcement’s investigation and/or a successful prosecution.

Gentile’s 1985 autopsy was the first to be sealed in San Diego County under a policy that remains in effect to this day.

The county policy allows a law enforcement agency – in this case the Sheriff’s Department – to keep autopsies secret by submitting an annual sealing request to the Medical Examiner’s office.

Dozens of homicide autopsies remain sealed as a result, including Gentile’s 1985 autopsy, investigative and toxicology reports.

In a recent interview with CBS News 8, Sheriff’s homicide Lieutenant Ken Nelson admitted that cold case detectives are not investigating any leads in the case. Still, Nelson said there are good reasons to keep Gentile’s autopsy sealed.

“If somebody were to come forward and we do have a suspect we’re interviewing, we want to make sure we have the right person. We don’t want someone to give a false confession and that has happened in the past,” Lt. Nelson said.

or the fact that she was informing on the San Diego Police Department,”

Gentile’s death certificate lists the cause of death as “manual strangulation and airway obstruction by foreign material” and indicates she was “beaten and strangled by another person.”

“She was still alive at the time gravel was stamped down her throat so it could have been to shut her up,” said Limberg.

One previously identified suspect in Gentile’s murder is convicted rapist and murderer Ronald Elliot Porter. He currently is serving a life sentence for killing Sandra Cwik, 43, in 1988 and dumping her body in the same general area as Gentile’s.

During Porter’s trial, five women testified that Porter had picked them up hitchhiking along Interstate 8, then pulled over near Buckman Springs, choked them into unconsciousness, and sexually assaulted them.

Now, with no new leads in the case, Limberg believes Gentile’s autopsy should be made public.

“It’s been 30 years. If they’ve exhausted all of their leads, why not let the public help them?” said Limberg.

Avrech said he is in the process of writing a book about Gentile’s murder and he is planning on “naming names.”

Carl Black, the demoted SDPD officer, was reinstated as a lieutenant in 1986 and eventually retired from the police department.

Over the years, detectives have interviewed hundreds of people and gathered thousands of pages of reports. New DNA testing was conducted in 2007 but failed to identify a suspect.

And, while the Sheriff’s department says there is nothing left to investigate, those who follow the case are still hoping for an arrest.

“It shouldn’t matter when it happened. It matters that she was a human being.

It matters that she died a brutal murder regardless of who committed that crime,” said Limberg.