Back in 1990-1991 I had the opportunity to work with Investigative Reporter  Paula Zahn and Dr. Bob Arnot at CBS  New York while I was attending Temple University Broadcast Journalism School. My job there was a producer on authors books that filled the mailbox daily.  I would help pick stories of interest to be interviewed and to say the least I went home regularly with a stack of books that came in daily. This inspired me to write my 2 books.  Paula has since moved on to True Crime Investigative Stories at Discovery. Interesting how I wrote a true crime book here on my cousin The Donna Gentile Story and worked with her on her steps in the same direction as I.

On the Case with Paula Zahn 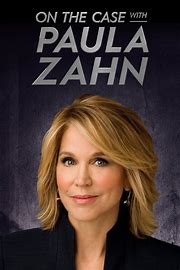 Emmy Award-winning journalist Paula Zahn brings her passion for justice back to America’s leading true-crime network Investigation Discovery (ID) for an all-new season of ON THE CASE WITH PAULA ZAHN. Premiering Sunday, July 15 at 10/9c, ON THE CASE takes viewers inside some of the nation’s most fascinating true crime investigations that shook communities to their core. Driven by Zahn’s unparalleled journalistic expertise, each episode of ON THE CASE delves into every twist and turn of these heartbreaking cases. Anchored by insightful and emotional interviews with criminal experts and those closest to the victims, Zahn profiles fascinating investigations from across America.

The season premiere of ON THE CASE follows the disappearance of 8-year-old April Tinsley in Fort Wayne, Indiana. After a playdate with a friend just a few blocks away, April never came home. Her mother immediately called anyone who might know her daughter’s whereabouts. When hours pass without any sign of April, police join the search. Three days later, a jogger discovers April’s lifeless body on the side of a road. She had been sexually assaulted and murdered. With no leads, the case went cold for two years until a chilling message was discovered not far from where April’s body was found. The message was the beginning of a terrifying game of cat and mouse with the killer that has lasted for decades.

Additional episodes of ON THE CASE episodes in this season include:

A Palmdale, California gas station had been robbed and the evidence indicated that the 20-year-old attendant, Leslie Long, had been abducted. The young woman’s purse was on the ground and her car was parked behind the office. Investigators put out a statewide bulletin on the young mother of three, the intense effort, would end when investigators discovered her body three day later, just 8 miles away from the gas station. Sherriff’s deputies got and important lead from a neighboring county that had recently helped convict a killer in a similar abduction/murder. They also learned that he had broken out of prison just days before the crime. Ultimately, it would take decades to follow the evidence to the long-sought truth behind Leslie Long’s murder.

When Barbara Rowan left her Bensalem, Pennsylvania house on a warm summer afternoon in 1984, she had a baseball mitt, a ball and a radio. She didn’t tell anyone where she was going or who she was meeting. When she failed to return home at her 7 P.M. curfew, her parents began contacting neighbors trying to locate the 14-year-old. Her family told police that Barbara was an incredibly reliable young girl who would not be late or cause her parents to worry. The investigation took a dark turn based on a neighbor’s report.  He claimed that the 14-year-old had told him that she was on her way to meet “her coach”. Investigators were troubled Barbara didn’t play any organized sports, so who could she have been going to meet? It now seemed likely that Barbara had been the victim of a predator who had preyed on her trusting nature.

Fans can check out past seasons of ON THE CASE on InvestigationDiscovery.com. Download ID’s TV Everywhere app on Android and iOS to catch up on all your favorite shows and browse the network’s entire library of true crime content.

Nine-time Emmy award-winning journalist Paula Zahn is the executive producer and host of ID’s “On the Case with Paula Zahn,” a weekly investigative true crime series. She also hosts WNET’s “NYC-Arts,” a weekly program that celebrates New York’s vibrant cultural scene. Zahn started her journalism career in local news. She criss-crossed the country working for stations in Dallas-Fort Worth, San Diego, Houston, Boston and Los Angeles.  She was first known nationally for anchoring the news segments on ABC News’ “Good Morning America,” and went on to anchor shows for CBS News, Fox News and CNN.

Investigation Discovery (ID) is the leading crime and justice network on television, delivering the highest-quality programming to approximately 85 million U.S. households. From harrowing crimes to in-depth investigations and heart-breaking mysteries behind these “real people, real stories”, the always revealing network challenges our understanding of culture, society and the human condition. The #1 network for women in all of cable, ID’s programming is available in both high definition (HD) and standard definition (SD), as well as anytime and anywhere through the network’s TV Everywhere offering, IDGo. For exclusive web content and bonus material, fans can follow ID on Twitter, Instagram and Facebook or check out the network’s true crime blog, CrimeFeed.

Investigation Discovery is part of Discovery, Inc. (Nasdaq: DISCA, DISCB, DISCK), a global leader in real life entertainment, serving a passionate audience of superfans around the world with content that inspires, informs and entertains. Available in 220 countries and territories and 50 languages, Discovery delivers over 8,000 hours of original programming each year and has category leadership across deeply loved content genres around the world. For additional information about ID, please visit InvestigationDiscovery.com

The Chilling Case Of Dean Corll, The Suspected Serial Killer Known As ‘The Candy Man’

Authorities believe Corll raped, tortured, and killed at least 28 young men in the 1970s. His alleged reign of terror ended when a …

Inside Ted Bundy’s Head: 10 Twisted Confessions From the ‘Angel of Decay’

Learn How the BTK Killer Changed One Family’s Life Forever

Come Face to Face with Gacy, Bundy, and Ridgway

What Does It Take To Track Down A Killer Like Andrew Cunanan?