How easily are children recruited in Human Trafficking 01:43

Atlanta (CNN)The pathway leading to the dark corners of human trafficking began in the fluorescent-flooded hallways of a Florida middle school.

Sacharay, which is how she wants to be known, was 14 years old and looking for a friend.
“I used to get picked on a lot about being dark-skinned. I started wearing glasses and was called ‘four-eyes.’ And then they knew because I was so sensitive, they knew it was getting to me,” she said.
Content provided by CNN Underscored
Your guide to picking the right bidet for you and your budget
Bidets may seem like a technology that’s out of reach and reserved for the rich. In reality, bidets are much more accessible than you may think.
But when an older classmate approached her and offered to be her friend, Sacharay thought maybe her fortunes had finally started to turn.
“I thought she was like my best friend because I could tell her everything. One day she asked if I wanted to skip school and have fun, you know, so we went to the barber shop. When I was there, she introduced me to these guys,” said Sacharay, now 19.
One of the men, in his mid-30s, immediately took notice of Sacharay. He soon began courting her with gifts, paying her compliments and offering advice on the daily dramatics of adolescent life.
“If me and my sister would be arguing, he’d be like, ‘You can’t get into an argument with your sister like that.’ He was more like a dad, but then again we had sex, so it wasn’t. It was just in the communication and how he talked to me,” she recalled.
It was child rape.
But this subtle, subversive mix of romantic love and parental care can create havoc in the mind of an adolescent, said Anique Whitmore, a forensic psychologist in Atlanta.
“What we know about sex crimes is that it’s not about sexual pleasure. It’s about control,” said Whitmore. “What is similar to some of those girls that I work with is their self-esteem or lack thereof. You either become vulnerable to a man on the street or a man you meet in school. You become vulnerable because you’re looking for attention.” 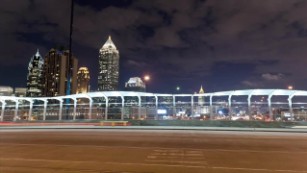 More than 3,500 sex trafficking cases were reported to the National Human Trafficking Resource Center last year alone.
Under federal law, anyone under 18 years of age induced into commercial sex is a victim of sex trafficking — regardless of whether the trafficker uses force, fraud, or coercion.
Sacharay’s exploiter eventually brought her and another teen to Atlanta, because he could command higher prices.
According to a 2014 study by the Urban Institute, some traffickers in Atlanta make more than $32,000 a week. 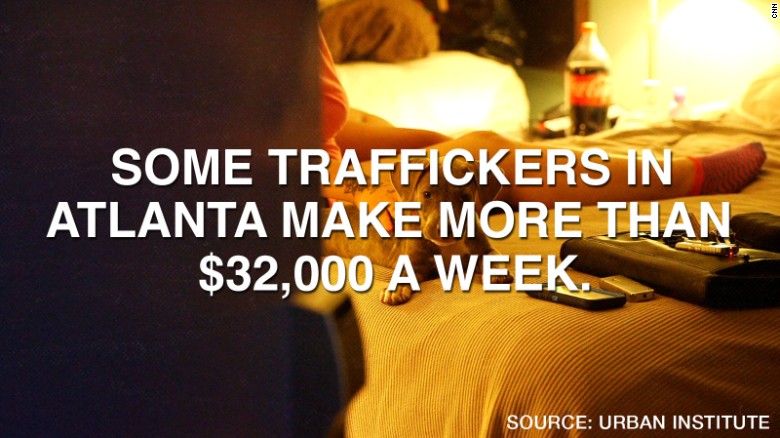 The study also cited research findings from 2007 that Atlanta’s illegal sex industry generates around $290 million a year.
“It’s a big city. There’s a lot to do in Atlanta. A lot of conventions, a lot of hotels, a lot of parties going on, a lot of events,” said Sgt. Torrey Kennedy with the DeKalb County Internet Crimes Against Children (ICAC) Unit. “So just like any businessmen, these traffickers know that.”
A big part of Atlanta’s draw is the airport, which is the busiest in the world. 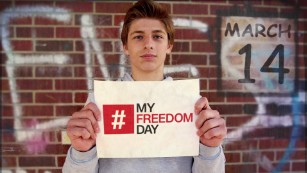 It’s #MyFreedomDay: All over the world, students are fighting slavery
“(A) man could get on that computer, anonymously, say, ‘I’m coming in to go have sex with this child.’ He’ll fly in on a 3:00 flight, meet the child at 6:00, and be gone on the 8:00,” said Dalia Racine, assistant district attorney for DeKalb County, which includes part of Atlanta. “How are we to ever find them? How are we to ever know who they are?”

Racine and Kennedy often work together to identify and then prosecute human trafficking rings.

As part of an investigative series, the CNN Freedom Project followed Kennedy and his team on raids for more than a year. According to Kennedy, it’s not unusual for a teen selling sex to deny that she’s working for someone, even if it’s against her will.
In June 2014, DeKalb County’s ICAC and Vice Unit conducted an operation to find underage victims. The team went exit by exit along I-285, the perimeter highway, to hotels where undercover agents had arranged “dates” through an Internet escort site. In several of those meetings, the escort who showed up turned out to be underage. 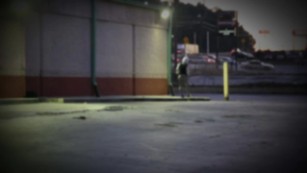 Georgia law gives authorities the opportunity to grant leniency if a girl is willing to go to a safe home. But if she declines, their hands are somewhat tied.
Kennedy encountered this heartbreaking situation on the raid, when a suspected victim of trafficking didn’t want any help.
“We don’t want to arrest her. But she would rather go to jail than a treatment facility. She said she’s ‘happy being miserable.”‘
Investigators believe a local trafficker bought the girl in question a bus ticket from Detroit to Atlanta, gave her a puppy and paid for the hotel room where she was found.
“She has one tattoo on her knee, we’ve seen multiple times in this area, and it’s likely it’s a brand from a local pimp,” said Kennedy. “That’s one of the new things from pimps. They put their logo on their girl. … The tattoo is fresh, which tells me that he just got his hands on her.”

Photos: Meet the people fighting to end sex trafficking
Kasey McClure uses her past experience working in the strip clubs, as motivation for her volunteer organization, 4Sarah. She visits Atlanta-area clubs, providing gift bags and a sympathetic ear to those who may be thinking of leaving the profession.
Hide Caption
5 of 9

Photos: Meet the people fighting to end sex trafficking
Dalia Racine, the assistant district attorney for DeKalb County, east of Atlanta, was the lead prosecutor in the case against Darryl Curry, also known as “Pimp DC,” a convicted human trafficker who posted videos on the Internet, instructing others on how to recruit and groom young victims.
Hide Caption
6 of 9

Photos: Meet the people fighting to end sex trafficking
Brock D. Nicholson is the former special-agent-in-charge for Homeland Security Investigations of the Southeast Region. Nicholson is currently DHS/ICE Attaché for Australia, coordinating all U.S./Australia investigations for HSI.
Hide Caption
7 of 9

Photos: Meet the people fighting to end sex trafficking
Mary Frances Bowley is the founder of Wellspring Living, an organization fighting child sexual abuse and exploitation. She has been a leader in bringing the fight against child sex trafficking to Atlanta and runs one of the country’s largest safe-homes dedicated entirely to human trafficking survivors.
Hide Caption
8 of 9

Photos: Meet the people fighting to end sex trafficking
Rachel McCool grew up in a small Georgia town. She says she was exposed to pornography as a child and later was prostituted out of a strip club. After going through a rehabilitation program at Wellspring Living, Rachel has a renewed faith in God and an optimism about the future.
Hide Caption
9 of 9 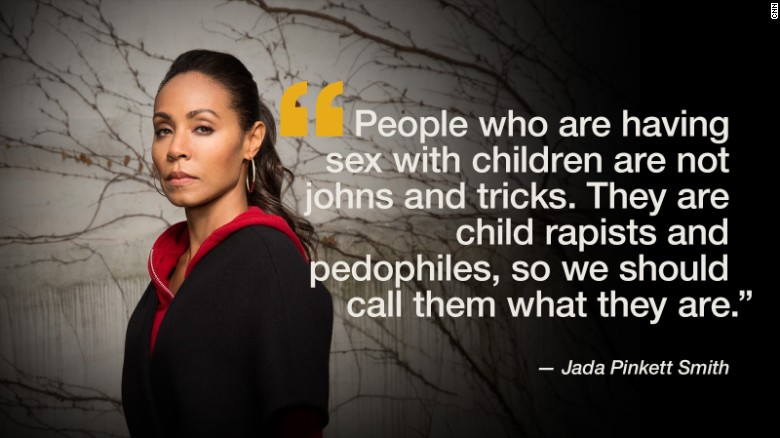 Photos: Meet the people fighting to end sex trafficking
Jada Pinkett Smith is on a mission to educate the public about human trafficking in the United States. In partnership with CNN, Pinkett Smith is getting to the root cause of this heinous crime. She’s exposing a growing billion-dollar industry, through the eyes of victims and those on the frontlines of the fight against modern-day slavery.

The human traffickers you never even notice 01:00

Soon, Sacharay’s trafficker began asking for “favors” — asking her to help make some money for him, by sleeping with another man.
“He was like, ‘I love you for that, I love you so much,'” said Sacharay. “Then he would slowly put two, three more guys. I got upset when I first realized what he was doing, but I kept doing it because he made me feel like I was special.”
The exploitation continued to escalate. Sacharay soon was being sold to dozens of men a day. She would meet these sex buyers in motel rooms near a freeway, or even sometimes in the back of the barbershop.
“One day I was like, I can’t do this no more. I was in pain. I had sex with almost 40 guys in one day, and I was so tired, and I said, ‘I can’t do this no more.'”
Her trafficker didn’t care. He made sure she knew leaving was not an option.
“He went into the other room, came back with a gun, and he was like: ‘If you go somewhere, we’ll see.'”

Why Atlanta is a ‘hub’ for human trafficking 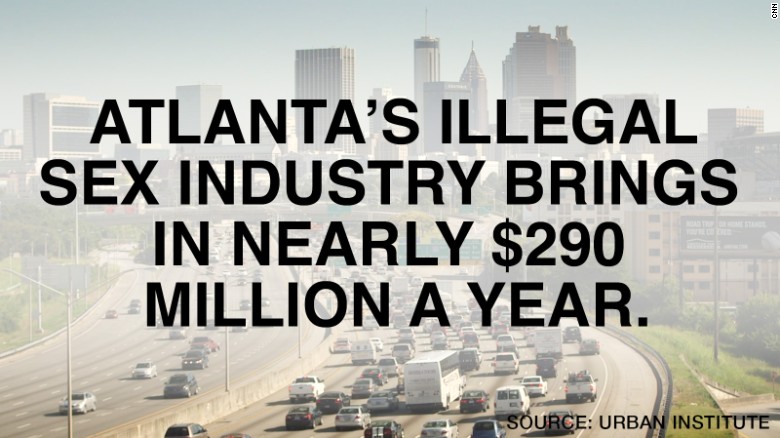 Sacharay has her own tattoos dating back to the time she was being exploited.
Her journey away from exploitation started at the doorstep of a sanctuary run by the nonprofit organization The Living Water Center.
The organization provided her with two things that didn’t seem possible just a few years ago: a GED and a job.
“I used to hate looking in the mirror at myself,” said Sacharay. “I still struggle, but I can say I’m stronger, I’m wiser and I can honestly say I do love myself. And I have hope for myself.”
Sacharay now has a new focus, and a new tattoo on her forearm that says “Free to Be Me.”
But for every Sacharay, there are countless young women still trapped in this dangerous and illegal trade.